A new year can inspire us to put our best foot, or paw, forward. If you are looking for motivation to be more dedicated and persistent in 2019, then look no further for inspiration than Gingi, an 8 year old Rottweiler. She is a patient of our rehab therapists Laura and Dr. Faith Lotsikas. 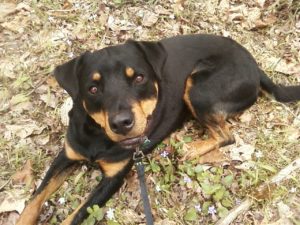 Gingi was adopted at 7 months of age from a local shelter. She had a healthy history until approximately a year ago, when she began to show signs of a neurologic condition. A local neurologist evaluated Gingi and an MRI was performed to determine the cause of her intermittent cries of pain while performing certain activities, ataxia and rear limb weakness. It was confirmed that Gingi was suffering from a condition called Wobbler’s Disease, which caused disc protrusions resulting in her symptoms noted at home.

Surgery to decompress the abnormal sites in her cervical spine (neck) was recommended for Gingi. Following the neurosurgery, she was placed on strict bed rest. Her owners were to assist her with much of her movement, including going to the bathroom and passive range of motion exercises on all four limbs. She was unable to urinate on her own and prescribed medication to help with bladder expression.

A few weeks following her surgery, Gingi was evaluated here at Skylos to begin a rehabilitation program. During her initial evaluation, Gingi was too weak to perform even the most basic tasks, such as supporting herself in a standing position. She mainly spent her time lying on her side.

As with all of our patients, Gingi was evaluated not only for her medical conditions but also to tailor her recovery plan based on her individual needs and personality. Gingi’s rehabilitation plan was comprised of two parts: an at home plan for her owners to perform daily as well as twice weekly rehabilitation sessions with Skylos. At home care included: sensory work, passive range of motion exercises, assisted walking and strengthening.  Part of her neuro re-education work involved helping her body and mind reconnect things like the steps involved to get into a sitting up position and then stand, or the sequence of moving her paws to ambulate. Her twice weekly rehabilitation sessions consisted of various modalities that changed over time as she progressed. Rehabilitation modalities included: massage and other manual techniques for her muscles and joints, laser therapy, and specific types of exercises to promote leg movement, balance, strength and proprioception. Gingi also began walking again in our underwater treadmill.

Gingi started her time off at Skylos with a few small improvements in the first week. She was able to remain sternal for a few short moments from her right side, would attempt to stand for a very special treat, and had improved withdrawal reflexes in all four limbs. However, during this first week she was still unable to stand unassisted. By her fifth week of at home therapy and rehabilitation sessions Gingi had made more progessive improvements. She was able to urinate on her own, walk around unassisted and stand from a sit or down position with little to no assistance. She even walked over 2 inch cavaletti rails! By the time she reached her tenth/eleventh week of rehabilitation sessions, Gingi continued to impress us all. She was beginning to regain muscle mass, was now able trot, could retrieve a treat off the floor without stumbling or falling and much more. She eventually was able to decrease her therapy sessions to twice a month from twice a week and continues to improve.

Gingi’s dramatic improvement has been no small accomplishment. Gingi has a strong will and desire to walk again. Her owners dedication to the rehabilitation sessions and at home care have been an integral part to Gingi’s recovery along with successful surgery. Gingi is an absolute joy to work with! She has been inspirational to all of us.

Cheers to 2019 and to Skylos patients accomplishing their goals, big or small! If you are interested in reading more about Gingi’s case, check out her detailed case study here: https://www.skylossportsmedicine.com/case-studies/gingi-ventral-slot/

Check out these videos to see Gingi in action during her recovery: