Biscuit was not Dr. Dave Hummel’s typical patient. There was no wagging tail or furry paws to greet him in the exam room. Instead, Dr. Hummel made a trip to the Marion duPont Scott Equine Medical Center in Virginia to meet a miniature foal with an uncommon problem.

Upon birth, this miniature foal was fighting a medical battle. He was suffering from a number of medical issues that included bacterial sepsis. Once treated and stabilized over several days, the veterinary internist overseeing his care in coordination with a staff equine surgeon decided it was time to call Dr. Hummel, a friend and former classmate. At this time, the foal should have been strong enough to stand with proper confirmation and nurse. Yet the foal was unable to do so. It was clear an orthopedic issue was present.

Biscuit’s knee caps were locked out of their groove, making it impossible for the foal to properly stand. He was suffering from bilateral congenital luxating patellas, a condition not commonly seen in horses. The severity of luxation ranges from Grade I to Grade IV, with Grade IV being the most severe. Unfortunately for this foal, both were a Grade IV and needed surgical intervention to help promote healthy growth.

Surgical correction of a luxating patella is one of Dr. Hummel’s favorite surgeries to perform at Skylos. His typical patient though is not a horse; it is a dog. Prior to the surgery, Dr. Hummel did his due diligence and researched techniques in horses through colleagues and medical papers due to the uncommon nature of this condition in horses.

When it came time for surgery the foal was just two weeks old. A team consisting of veterinarians, Krista Estell, DVM, Diplomate ACVIM and M. Norris Adams, DVM, Diplomate ACVS, Diplomate ACVSMR, along with residents and interns assisted in overseeing the care of the foal. Dr. Hummel performed the orthopedic surgery. Although the foal weighed in around twenty six pounds, his anatomy was more similar to an eighty pound dog, making Dr. Hummel feel right at home. To correct the luxation, Dr. Hummel released the joint capsule and connective tissue to allow the patella to move back into the groove. Once back in place, he tightened the tissue on the inside to keep the knee cap in place. With the correction complete, an excellent prognosis was given to the foal. 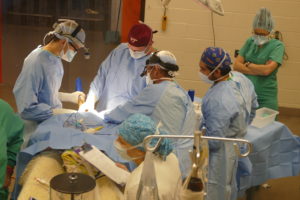 Restricted activity post-op was the doctor’s orders but this foal had something else in mind. Shortly after surgery, he was standing! From there, he began to test out his new found strength and hasn’t looked back since. His owner lovingly named him Biscuit, short for Sea Biscuit, since he is now running around like a race horse! This challenging and unique case was a pleasure for Dr. Hummel to be a part of. With the help of the team from the Marion duPont Scott Equine Medical Center and Dr. Hummel, Biscuit is progressing well and enjoying acting like a foal! 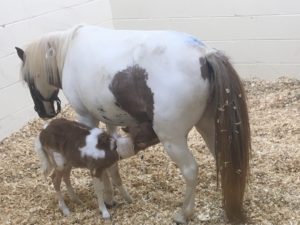 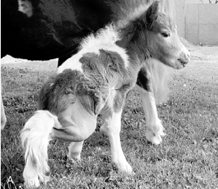